Find this article at:
go.ncsu.edu/readext?270382
— Written By NC State Extension

There are approximately 700 child care facilities across Wake County, and about 25 percent of Wake County’s 77,000 young children are enrolled in regulated child care, where they receive most meals and snacks five days per week, year-round.

Approximately 145 child care facilities serve children whose families receive subsidy in Wake County. According to the NC PASS 2011-2012 data, 15.7% of low-income children ages 0 to  5 are obese (greater or equal to 95th percentile) in Wake County. Based on experience gained from community efforts, it is understood that child care facilities in Wake County provide a broad range of meal and snack food options. While some facilities are making improvements to their healthy offerings many continue to provide minimally required servings of fruits and vegetables and other less healthful snacks. This translates to a tremendous opportunity to nourish our youngest citizens with healthy local fruits and vegetables, create lifelong good eating habits, and support local farmers and the local economy in the process. 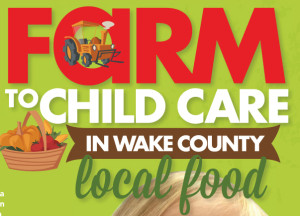 Through a collaborative effort which included Wake County Smart Start, Advocates for Health in Action, and Wake County Cooperative Extension an assessment was conducted through a planning grant awarded from John Rex Endowment to explore the local farm to table movement in the context of child care facilities. Child care facilities receiving subsidies (and therefore serving the children who are most in need) and farmers were surveyed to learn how to facilitate connections for them and enable local farms to be a source of produce for the centers. Eight center directors participated in focus group sessions and 98 center directors participated in a survey. Sixty-four families from eight childcare centers (eight families per center) were surveyed. Eight Wake growers were interviewed.

Findings indicate that despite perceptions, locally grown produce does not necessarily cost more than fresh produce, but fresh produce does cost more than canned and frozen produce. Generally speaking, child care center directors reported that their local produce costs were comparable or less. Nonetheless, purchasing fresh produce is significantly more costly, and it requires more staff time. In the few cases where the local produce cost more, it was a minor price difference. This finding is extremely valuable since many directors surveyed in the initial part of this grant identified cost as a barrier to purchasing local produce.

In addition, farmers identified their need to have a dedicated staff person to receive a center’s order, harvest the produce and deliver it to the center in order for the process to be sustainable for themselves and reliable for the centers.

From data collected and an overwhelmingly positive response to the pilot, a plan to improve access to healthy foods in Wake County child care facilities is being developed. The partners are seeking funds to further refine/expand the project. Read more.