— Written By Becky Bowen and last updated by Joanna Lelekacs

In the Fall of 2015, USDA’s Agricultural Marketing Service (AMS) piloted a research project to provide a comprehensive picture of the local food system in six states (Alaska, Arkansas, Arizona, Kentucky, Mississippi, and North Carolina). This 2-step research project, called the Local Foods Resource Mapping Project, is intended to identify gaps in the local food system infrastructure. The information gathered through this project will be used for purposes of:

In North Carolina the first part of the project consisted of a three hour focus group held in five locations across the state in the early Fall of 2016. A written summary of the feedback gathered from the focus groups provides valuable insight on the state of the local food system in the Southeast, Sandhills, Triangle, Piedmont Triad, and Foothills regions of the state.
A second part of the project is currently underway. Producers, processors, institutional buyers, economic developers, educators, local governments, and other participants in the regional food systems in the counties listed below are being asked to complete an online questionnaire that will further inform this research on the state of the local food system in North Carolina. 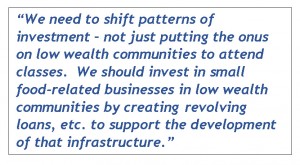 This research is being conducted by Community and Rural Development at NC State Cooperative Extension.