Find this article at:
go.ncsu.edu/readext?798806
— Written By Emma Jablonski

Leigh Guth is the County Extension Director for Pitt County. She has served in this role for six years, striving to keep local food at the forefront of Pitt’s programming and goals. Her background includes adult education and advocacy in the nonprofit sector. Prior to her Director role, she was the Family and Consumer Science Agent for Lincoln County. There, she developed her passion for local food systems and their importance in communities. She continues to make waves through Pitt County and beyond, encouraging others to invest in local food and exemplifying healthy leadership.

Pitt County is one of the largest counties in North Carolina by square miles. The County covers approximately 652 square miles of prime agricultural land in the eastern part of the state. “[There is] a long history of agriculture, but it’s commodity agriculture, which is a real factor when you start talking about the local food system,” said Leigh. She has seen this effect on farmers’ markets, where there is a desire to implement more yet there is not enough produce to sustain the market. Leigh shared, “Extension has work to do on a local level to help educate that new generation of farmers.” According to Leigh, Pitt County has recently transitioned into a more urban environment, yet due to its large size, much of it is still considered rural. The N.C. Cooperative Extension of Pitt County office recognizes this and aims to maintain a staff that can address both urban and rural needs. 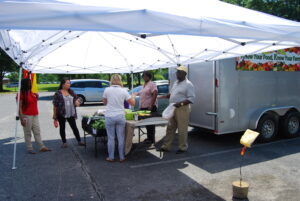 When Leigh arrived in Pitt County in 2015, there was a growing effort to assemble a food council. At the time, Pitt was above the state average in food insecurity yet leading the state in tobacco, cotton, peanuts, and soybean production. A food council was seen as a way to better explore this dichotomy and figure out solutions. Leigh joined the food council development team and in 2017, the Pitt County Farm and Food Council was established. Pitt’s Council differs from others in that it is appointed by Pitt’s County Commissioners. It has 13 seats; three of those seats are for County departments: N.C. Cooperative Extension, the Health Department, and the Planning Department. Leigh feels that as a Local Food Coordinator, working with the County’s food council has been her largest undertaking.

Leigh’s favorite part of working with Extension is learning something new every day. “You get a chance to keep your mind fresh, your mind open to new ideas and how to answer new issues. I think that’s a crucial part of life and especially for an Extension agent to be willing and open to learning every day,” Leigh said. She has also enjoyed building her team in Pitt County, specifically working with younger agents in guiding them and helping them get started. When talking about her team and its makeup, Leigh expressed, “If we want to build a more viable local food system, then we have to make sure that that’s included in our job description and in the person that we hire.”

In 2019, Pitt County decided to apply for the National Civic League’s All-America City award. The award recognizes communities that leverage civic engagement, collaboration, inclusiveness, and innovation to successfully address local issues. It is a highly competitive honor with very few applicants winning it on their first attempt. Leigh credits her relationships with other County leaders and department heads to helping get N.C. Cooperative Extension of Pitt County at the table for discussion. Ultimately, they were able to be a part of the application process, which involved highlighting Extension’s work. This meant that Extension would represent some of the entire County’s efforts for the prestigious award. Pitt’s NC Farm School, Community Garden Coordinator, and Farm and Food Council were featured along with a discussion on racial inequality’s presence in the food system and land. Leigh, her team, and the rest who made the Pitt County submission happen were named an All-America County Winner in 2020.

While the Visit NC Farms’ phone app was still in its pilot, Pitt County had already developed and rolled out Food Finder, a phone app that highlighted food assets, farmers, farmers’ markets, food pantries, and places to apply for WIC in the area. Leigh led the app’s creation. In contrast to Visit NC Farms, which focuses more on economics and agrotourism, the Food Finder app concentrates heavily on food assets and access. In an effort to streamline, Leigh is part of the local team now moving Pitt County from their Food Finder App to the Visit NC App. She supervises the Food Council Coordinator who is executing the project. 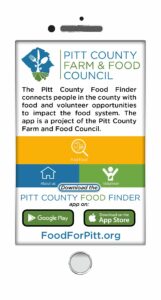 In 2020, the severity of food insecurity was recognized as an issue that could no longer be ignored, especially due to COVID-19 impacts. The North Carolina Association of County Commissioners (NCACC), a non-partisan organization made up of all 100 counties in North Carolina, voiced their concerns on food insecurity. The NCACC’s 2020-2021 Executive Committee President, Ronnie Smith, chose this topic to be his focus project as the Chair of the Association. Leigh has spoken several times about this issue with the Commissioner Chair. Leigh and Pitt County’s team had already completed some work related to this topic: a food assessment (collaborated with East Carolina University). Leigh recently presented to the Commissioners to discuss food insecurity at the national, state, and local level including data from Pitt County and from Feeding America’s Map The Meal Gap. “The [NCACC] was trying to get all the counties to recognize food insecurity as a critical conversation that needed to be had,” said Leigh. Her presentation was a success with the Commissioners signing off on the resolution. Leigh contributes this achievement to laying the groundwork early. “Sometimes with food councils, you’re not really sure why you’re doing it or there’s not a clear task you’re supposed to accomplish, but we’ve always said that this lays the groundwork to allow us to access things and it’s paid off.”

The Future of Local Foods in NC

In terms of a sustainable future for local food, Leigh believes that some policy has to change to help individuals. For example, assisting families that inherit land with making informed decisions about the land’s future. She sees tremendous economic development opportunities still available to farmers and farms, as well as a need to focus more on environmental quality and changing our human habits to keep the planet safe and healthy for generations to come. She shared that life-changing events like the pandemic have left people with the desire for more security, which has been discovered through growing your own food and supporting local farmers. She is hopeful that this will continue. Leigh concluded with the important reminder that, “As our community changes, we have to change with it.” 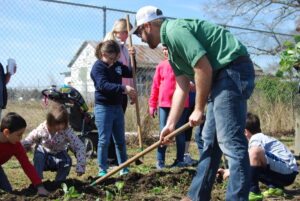 Leigh loves sauteed squash and onions cooked to perfection in a cast-iron skillet.