Find this article at:
go.ncsu.edu/readext?819022
— Written By Hannah Dankbar and last updated by Morgan Marshall

Paige Burns is the County Director and Horticulture Agent in Richmond County. She primarily covers consumer horticulture. The primary focus of her programs is highlighting production of horticulture crops or some aspect of production, such as season extension techniques. In her role she also works on a County Demonstration Farm, works closely with the Sandhills AGInnovation Center, which is a food hub serving the Sandhills region, and brings growers together for educational workshops. 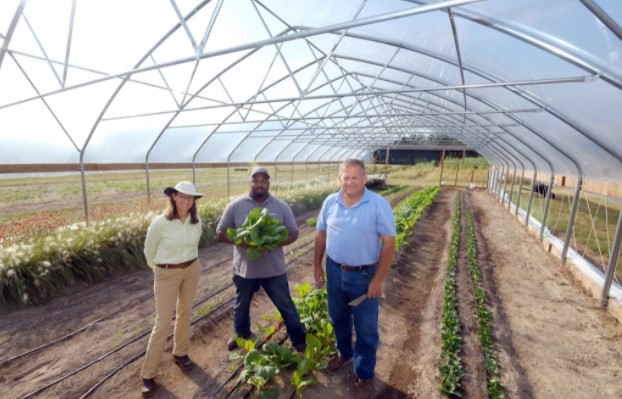 Paige Burns (left), pictured with Davon Goodwin and David Clark in a high tunnel at the Sandhills AgInnovation Center.

Richmond County is located in the Sandhills Region of North Carolina. Historically, this area was a vibrant horticulture crop production area, famous for peach production as well as other horticulture crops such as strawberries, melons, squash, and more. Production has declined over the past decade or so, due to labor shortages, loss of farmers, and a challenging production environment (such as the sandy soil). In addition to lower levels of production, Richmond County is facing a declining population and low-income levels.

Paige enjoys, and has found success, with implementing hands-on and experiential learning for her stakeholders. “I enjoy working on hands-on projects and bringing growers together to learn and try something new. For example, a high tunnel building workshop, a caterpillar tunnel workshop, and a blueberry workshop where people learned about blueberry production, planted blueberries and pruned bushes.”

For her stakeholders she has found face-to-face and hands-on programming to be the most effective. Paige spends a lot of her time teaching out in the field. “We did an X credit, private applicator training focusing on pest management in green beans and peas, that featured a demonstration of a mechanical green bean picker that a local group had available for farmers to use. Next week I have a sweet potato workshop and in addition to covering basic production, we’ll harvest the four different varieties I grew in the demo farm and compare the different characteristics.”

Besides being an educator, Paige plays a variety of roles. For example, Paige has been one of the main organizers of the NC Peach Growers Society Annual Meeting in January for the past decade. Most recently, she helped develop the “Richmond Fresh” produce box program. This program was developed with grant funds that had to be repurposed after a summer camp was canceled due to the Covid-19 pandemic. Being one of the early food box programs, it set the Sandhills AGInnovation Center up to engage with many other box programs that were developed. From May until July last year, she helped pack and deliver several hundred boxes per week, until additional help was hired to take my place. At this point, the SAIC has moved over 40,000 boxes to help those in need, primarily using Sandhills and North Carolina-grown crops.

An event that Paige is particularly proud of was held In September 2019. “We held an “Extension Open House” at the Sandhills AGInnovation Center in Ellerbe. It highlighted Extension’s areas of work, plus brought together some of our closest partners. It was held on a Saturday, and about 100 people attended. We had crops in the high tunnel (bok choy, fennel, beets, Swiss chard, and more), had a paper pot transplanter demonstration, cover crop demo, bottle cow (everyone loves baby animals!), BCS demo, drone demo, healthy food taste testing, youth robotics, and archery, to name just a few of the highlights. It was just a fun day, lots of people out enjoying the day and all the different things to see and do, and was a great way to highlight the broad reach of Extension programming. Everyone seemed to have a great time. I think it was an event that could easily be replicated in other counties (and they probably do!).”

When asked about her role as a Local Food Coordinator, Paige pointed out the importance of working across program areas and geographic areas. “I think it is challenging to serve as a Local Food Coordinator if you’re living in a rural area that doesn’t have much of a “foodie” culture. Finding ways to encourage people to support local farmers – which sometimes costs more – is difficult. I think Family and Consumer Science Agents, who are often Local Food Coordinators, are a critical component to encourage more healthful and local eating in our clientele. I think local foods will likely become more of a feature of urban centers and tourist areas, such as the mountains, and as farmers become fewer in rural areas, it will be harder to access fresh local produce in some portions of the state. ”

More information about Paige’s workshops and other work is available on the N.C. Cooperative Extension, Richmond County Center website. 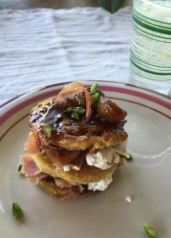